Showing posts from December, 2013
Show all

It's The Night Before Christmas

'Twas the night before Christmas, and all through the house Not a creature was stirring, not even a mouse The stockings were hung from the chimney with care With the hopes that Saint Nicholas would soon be there The children were nestled all snug in their beds While visions of sugar plums danced in their heads And ma in her kerchief and pa in his cap Had just settled our brains for a long winter's nap But one of the children was gone from their bed And a slice had gone missing from ma's loaf of bread Away to the barn she had flown like a flash Made her way to the stall, and undid the latch The sweet smell of hay flooded the air around As four turning hooves clopped across the ground When what to her wondering eyes should appear A fat, chestnut pony with one eye and one ear With one clubbed foot on a stocked left hind With some hair missing and a rear end too wide At the sight of the pony, the child gasped And then, to some higher being, she asked "B
Post a Comment
Read more 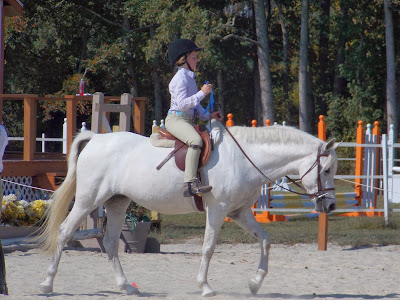 I should do a sad story for you guys, but not this week. You're lucky this week.   Her hands were tense, and her mind was busy trying to get the side pass. She struggled immensely. “Come on, Bentley,” she growled. Beneath her, the big warmblood moved every which way that he so pleased. He fell too much to the inside, crossed his legs like a confused ballerina, and moved forward when his rider bid him not to do so. The girl was flooded with emotions of anger, but Bentley just snorted, licked his lips, and ignored cues. “Rabecca, you’re getting frustrated,” the trainer warned. The girl, Rabecca, got snippy. “Well this stupid horse isn’t listening to my cues,” she snapped. Rabecca asked for the side pass again as she spoke, and when Bentley refused to do the movement, his rider gave him a sharp bang on both sides with her spurs coupled with a forceful tug on the snaffle. Poor Bentley couldn’t take that kind of treatment to his sensitive body. He bolted fo
Post a Comment
Read more 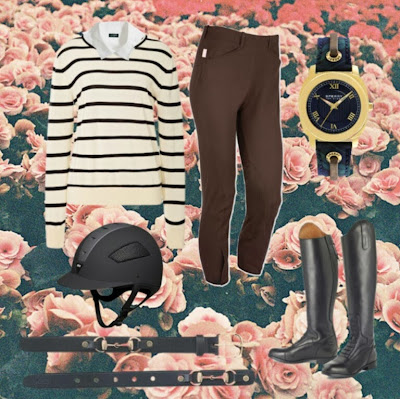 Okay, I know I didn't post last week, but I wasn't able to go to the show and my work day was shortened and I had an essay to write, so from Wednesday to Saturday, I quit on everything, but I am alive and well, and we had our barn Christmas party on Sunday, and that was a lot of fun. Even cleaning the pasture was nice because it was warm, and warm is good. I rode last week on Tuesday as well, and I tested out my camera. The video quality isn't fantastic, but it's good enough that you can see me and my equitation, so I'll make sure to get a full video the next time I ride. Now to what really matters, fashion! This one is called "The Water Horse" because I was going for a a nautical theme, but I'm not sure if I made that obvious (read: I missed the boat and got on an entirely different boat). 1.  Kule Fraser Crewneck Stripe Sweater     modaoperandi.com 2.  The Tailored Sportsman TS Low-Rise Breech     smartpakequine.com 3.  Sperry
Post a Comment
Read more 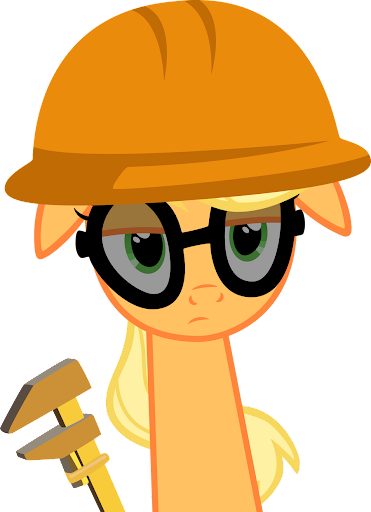 Pretty complicated title for a fairly basic post. I had a wonderful show today, and I'm going to tell you all about it because this is what my blog is for. So, after my ride on Wednesday, I was feeling pretty pumped for this show, like, major pumped. I was so ready to kick booty, and, if I do say so myself, I kicked a considerably large amount of boo-tay. I spent Friday afternoon and night with my trainer and Fifi. Fifi, Izz, and I had a sleepover in Miss S's play room. This is basically the ritual for every show. Spending the night with Miss S and some friends is a major part of the horse show puzzle for us. I rode Friday at the show grounds right after school, and I was feeling okay with how I was riding. My new gear had just come in, and the boots were pinching my ankles a bit, but it wasn't horrible. I was riding centered and confident, which is always good. The stiffness was there though. It wasn't as much as it usually is, but it was there and it was bothering m
Post a Comment
Read more

The Doubting of Doubts This week's story is actually a real account, so I hope you like it! I can remember sitting down one Saturday, turning on the TV, and flipping to the channel on which the Breeders Cup was being broadcast. This was odd for me as I wasn't big on daytime television nor was I a fan of any sorts when it came to horse racing. I was simply bored that day, and, while the Cup didn't cure my boredom, I still watched for one race. I'm glad I did. I'm a kind of gambler; I bet my pride, and my pride is not something that I plan on losing anytime soon. I was sitting there for this one race and watched as all the horses made their way to the starting gate. I hadn't bet anything yet, but I had distinct favorites before the race even started. Funny thing is, I don't remember which horses I liked. What I do remember is a jet black colt who has stuck with me for years. I don't think he had much white on him; he was just black. He was tall, lean, pure racing Thoro
Post a Comment
Read more

Okay, I change my mind.

December 04, 2013
You would think after getting so excited to have my stirrups back that I would relish the moment that they were once again on my feet. Honestly, nnnnnope. I couldn't stand those darned things during my ride tonight. It started out fine when we first got on. We were just walking around, and I was relatively comfortable. We decided to ride outside while there was still light and then go inside when it got too dark. So we get out there, right, and we start trotting, and I just quit. It was so wrong, so awkward. I first had to lengthen my stirrups, but they are still uneven, so I was rather angry about that. The longer stirrups do help, though, and that was one of the things that I had planned to do by the end of last month. I push off of my stirrups so much and then scrunch up my leg. That is no longer acceptable (as if it ever was), and I plan to work on that a lot over the next month now that I am riding twice as much. Getting back to the actual riding part, we're out there wa
Post a Comment
Read more
More posts