Showing posts from July, 2016
Show all

Houston, we have a canter 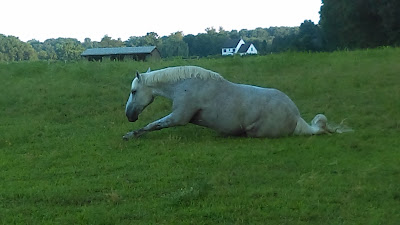 Well, a better canter. A more appropriate title would be "Houston, we have a right lead," even if it's a bit rushed. Max is really trying his best despite the physiology not helping him out all that much. Whatta ham Max and I had our last lesson at Miss El's on Tuesday, and he went back to his home on Wednesday. He was actually supposed to go back on Monday, but for some reason we got an extra two days. Totally worth it, tho. He keeps getting more and more consistent with less BTV moments and taking more contact. For the moment, he still likely to lean, but we didn't have much in terms of rooting or giraffing. The biggest focus for the day was softness in the transition. Thus far, we have allowed a hollowing and giraffing through the transition with a correction once the transition is complete; this is basically where the walk to canter and trot to canter transition are because, well, he's not super balanced and we've gotta let him do what he ha
Post a Comment
Read more

Fashion Thursday: me? blue? where??? 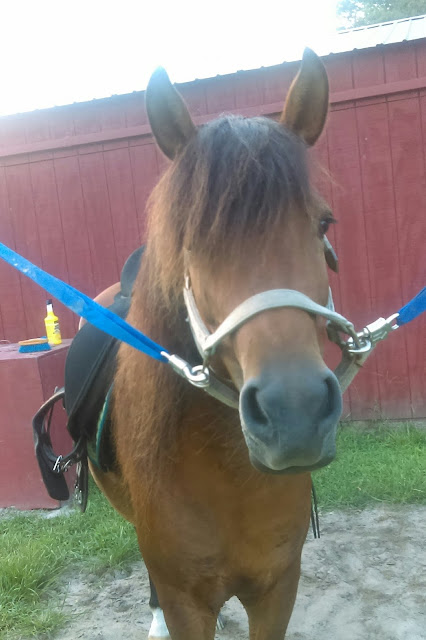 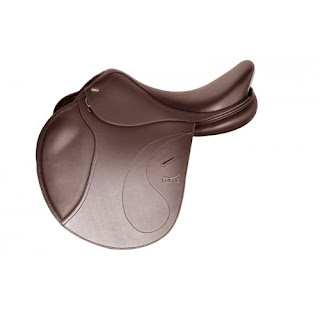 So what, exactly, do I want to do in the near and far future that I'm so hesitant to commit to? Well, it's a couple of things. 1) Get a saddle Yeah, I want my own again, mainly because I hate getting to the barn at school and having to fight gladiator style over a Toulouse. I really just want something that fits me and that is adjustable enough to fit a decently sized range of horses. If anything, I'll get a cheap, shimmable half pad with it for good measure. The main reason that I'm hesitant is because I don't want to make that kind of investment then bring a lease horse home and have it not fit them at all. I want it, idc what hunter peeps think 2) Lease a horse And that brings us to the second point: leasing a horse next year. I mentioned in Vlog 1 that I was thinking about leasing Beorn. I just texted Steph today, so we'll see how that turns out. If his owner is open to it, and I'm able to play my cards right, I'll hopefully be able to
1 comment
Read more 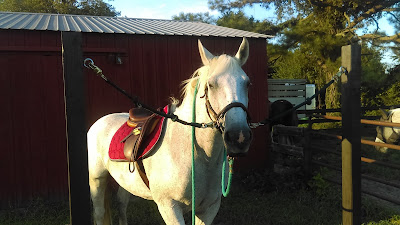 Because that's what Max is. Yes, you, ya cutie Sure, he'd be a bit fancier if he lost some weight and could get his legs under him, but he tries. After a discouraging second ride, I was pretty excited to have Miss El right there to help me with Max last week. Granted, that second ride was certainly the calm before the storm, and we're still in the aftermath, but the eye has passed over, and we can now move forward (literally and metaphorically). As mentioned in Vlog 3, my ride on Tuesday was straight outta Tartarus. Basically everything we had accomplished on Sunday was completely gone. It was argument after argument with 0 softness and a ton of negative tension. My hands were heavy enough to break some skin, which doesn't happen unless I'm being excessive. Max shut down on me, rightfully so. ne pas bien No doubt I was upset about that, and I was ready to go crying to my trainer about how I'd ruined all her work. I took Wednesday as a day to settle
Post a Comment
Read more

In all honesty, this vlog wasn't really planned at all. I just filmed some stuff. Filmed Friday, July 22, 2016.
Post a Comment
Read more 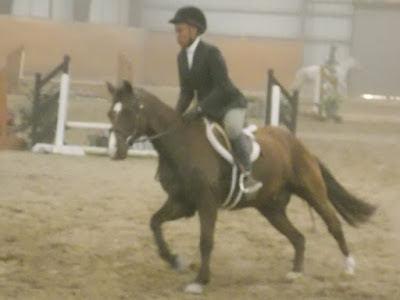 So after yesterday's disgustingly-sad-with-cliché-inspiring-last-paragraph post, it's time to pat myself on the back for the times that I've managed to kick ass and take names. Beckz from I Will Jump Sweet Jumps (arguably the sickest blog title) came up with this awesome blog hop. In chronological order . . . The start of my 2013 show season, when I showed Duke in long stirrup and pleasure pony. He was losing it, but guess 👏 who 👏 kept 👏 it 👏 together 👏. Course when I thought he was finally chilled out during the combination hack, he ended up booking it through the line and took a daring distance to the second fence. I stayed on, though. Props to Duke for his athleticism. There was also that time I bombed my way through the o/f classes only to win the flat because you can't have a refusal when there are no fences to jump. After a rough season, Baby & I finally qualified for the medal final and made it over everything, then switched it over to t
2 comments
Read more 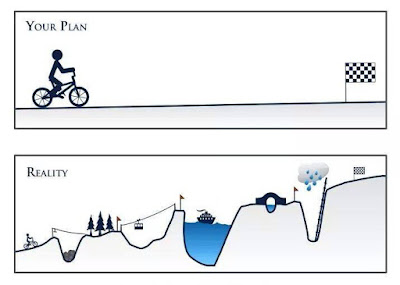 I believe this is only my third year actually have specific, well noted goals to accomplish over a course of 12 months. Unfortunately, this is my second year having to scratch most of my goals due to life circumstances. from College Essay Guy To be quite honest, it's frustrating. I spent the whole year excited to come home and get back to riding the mare. I took the time to plan and prepare, including a back up plan. I knew what I wanted to do for the next two years with a horse that I felt comfortable on and had faith in. Then, at the hands of others, none of that was possible anymore. Getting a text that just started with a "No . . ." crushed me. The things that I'd hoped for and daydreamed about every day while walking to class were gone. On top of that, I hadn't ridden for a while, it was now highly uncertain when I would ride again, I had no new content for this blog and had painfully watched my stats suffer (I do actually care about this thing), and I
6 comments
Read more

Just to be clear, this was filmed yesterday, so when I say "today" I mean yesterday. Sorry for any confusion. BR Monaco Competition Coat BR Budapest Collar Harry's Horse Velvet Half Chaps
Post a Comment
Read more 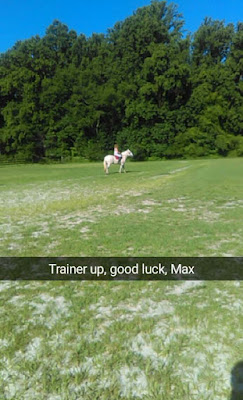 So, Max and his buddy Oaklee are staying with my trainer for the next week or so while their owners are away on vacation. Hooray for me because Miss El finally got her own place, and it's right down the street from me. I could bike there if I wanted to; I could probably run there if I really wanted to. I took a lesson yesterday because, well, I need her to understand fully what I'm dealing with so that she can better assist me in the long run. Max is full of resistance, and while he does go, we can go better. Miss El hopped on before me and basically softened him up so that I could be more successful once I got on. I've never been a big fan of letting a trainer ride my horse before I do because it makes me feel like I'm mooching off of someone else's work rather than putting in my own effort . . . but let's be real, I needed her. My version of getting a horse soft is never touching the reins and hoping that they magically understand the concept of contact
1 comment
Read more

Thanks, L for giving me a reason to talk about myself. 1 . Do you actually always pick the horse’s feet? Always? Really? Like 80% of the time. If they've been out and the pasture is mostly dry, I shrug it off. Otherwise, I pick. 2. What is the biggest obstacle/reason preventing you from becoming a professional or competing full time with ease? Money, y'all (and partially no license, but mainly money). That being said, I could be filthy stinking rich and still try to find ways to cut costs. not my life, unfortunately - image from giphy 3. Do you think it will ever not be about the money? Nah, not in this world. I think we could easily (more or less) start promoting less than fortunate riders so that they can get their foot in the door of more opportunities. 4. Was there ever a horse that you loved and really wanted to have a connection with, but it just never panned out? Details . There are a handful, but I think the one that affected me the most was Enzo. It was
1 comment
Read more 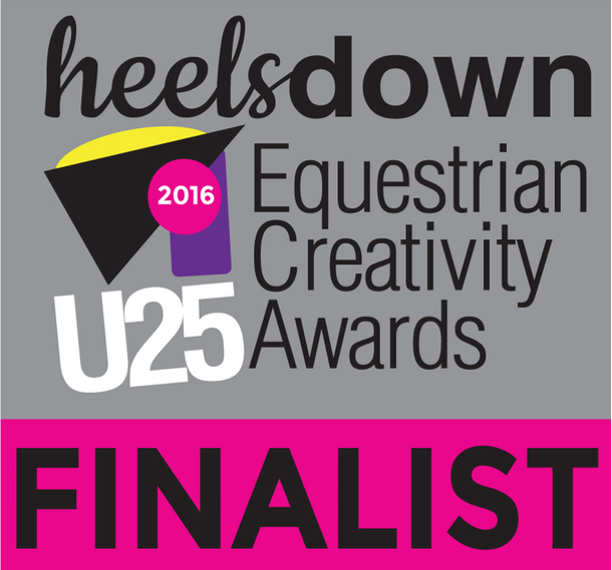 Today, I was finally (FINALLY!) able to do a proper right facing oblique. It has literally taken all 6 months for me to achieve this, and while it still has some way to go, I'm glad that my body is actually responding to the tougher parts of my workouts. Work on your weaknesses until they become strengths! look @ that collapse (image from Your Tango ) Related also are my weighted lunges. I've realized that my physiology while doing those is quite similar how I am on a horse, at least on the upper body aspect of things. My right side collapses, and it's much harder for me to recover on my own two feet than it is on a horse. Solution: lift the right shoulder. Even though I had no issues during my last ride, I'm labeling my collapse as something sporadic. Yeah, it's probably a part of my actual, natural anatomy, but it screws with my flatwork, so I need it to not. Horsey things, my most recent delivery from Divoza came in. FedEx said it wasn't going to get
Post a Comment
Read more
More posts