August 17, 2014
When they're not throwing unjustified fits because you ask them to trot or canter, they're fun. Trust me, I am a scientist. I know things.

We have this pony at the barn named Zoey, and she has been a long, drawn out project that would likely get a terrible grade if she were turned in at this point. Miss S has had her for two or three years now; she was one of the first ponies that was bought for the kids. She was green then, but calm and fancy, so Miss S got her (along with the Satan pony that is Blue) and started riding her. Welp, a couple months in, she came up lame. She was given some stall rest, we had her legs checked, and the apparent problem was how her feet were being trimmed. Everything was sorted out, and she was fine for another couple of weeks, but then she came up lame again, and that's basically what the past two years have been. She's been lame on and off and ended up having six months of stall rest at one point. Mind you, this is a rather high energy pony, so hand grazing her was not very enjoyable, and she decided to become afraid of brushes in that time. After the six months, she was sound again, so Miss S started working slowly with her, but time constraints basically bottlenecked any progress. Plus, Zoey had all of a sudden changed her demeanor. She went from being calm and mannerly to rushy undersaddle, and she's gotten quite the attitude. It's been an uphill battle, one that we're still fighting. Zoey has been completely sound for the last four or five months, but you can't really sit on her at the canter or else she throws a fit, and she always rushes the second element in a line.

Two years ago, at a point in time when Zoey was actually sound, I did ride her in two separate lessons. The first one was ugh. I got on and was walking around when she spooked and just took off cantering, and I was still learning to canter then. That lesson went horribly because after that incident, she would jump into the trot, to the point where I was posting like a jockey. It just wasn't good. The second time, which was maybe two weeks later, was actually better. I could trot her, and she completely relaxed under me. I even trot her over a little crossbar, but I lost my body control afterwards, so she cantered away, and I was just slipping and sliding everywhere, but it wasn't a bolt or a panic on her part. She was still wild when you asked her to canter, but that's a story for another day.

In case you're wondering where my fashion sense started and why I stopped using my saddle (which is still for sale, by the way).

So this brings us to Friday. I have no shows looming in the distance, so I decided to try out Zoey because if no one rides her she's going to be sold, and I'd miss that pretty face, so I gave it a shot. I miss the calm version of her. Within seconds of getting on and walking forward, she pins her ears and starts kicking out, which I promptly corrected because I have no time for bullshit. I had to shorten my stirrups to jumping length because flat length makes me feel like a giant on her. Syd was the only other one in the lesson, and she was on Molly. We walk for a little bit, then Miss S has us trot, and good Lord, you'd think the horse has never trot before. She just takes off into this maniac, I-was-a-harness-racer-in-another-life, type of trot, while bucking at the same time, which I genuinely have to give her credit for, because she covered some significant ground while simultaneously trying to murder me. This is a horse you can learn to multitask from. 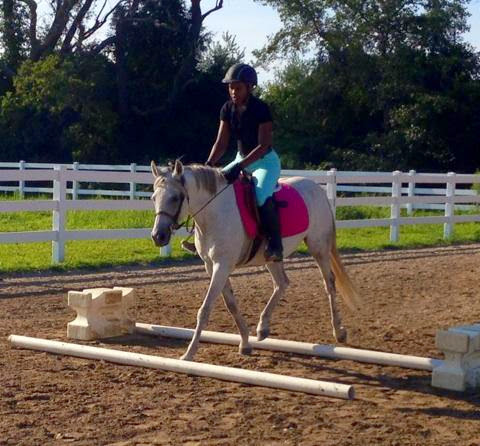 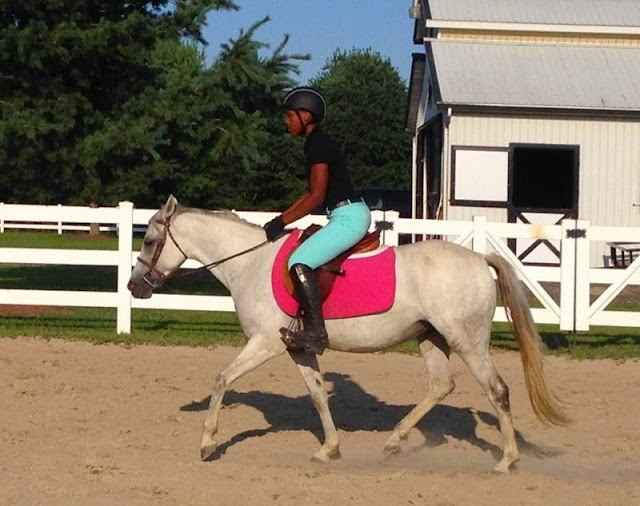 I put her straight to the arena fence and made her stop before I put myself back together, and we tried again, and the second round was much better. I just kept trotting her in laps, I took her off the rail (gotta make Marianne happy), we did serpentines, and circles, and figure-8s, and she's just going along, suddenly not possessing even a drop of care about anything. Then Miss S had us do a line with each jump just being trot poles. Zoey, since she is consistent on occasion, did canter through the second group of poles the first two times that we went through the line, but on the third time, she actually trot through it. It seemed so simple, but it was this massive break through, and I shed every bit of fake love and affection that I could garner up onto this horse because I know that she's done this wonderful thing, but I'm still holding the bucks against her. We went through it two more times, and she was great, then we switched directions and did it three times in a row without incidence.

Miss S decided to up the ante. She put up a cross bar for the second fence. I really expected Zoey to just launch herself over this cross bar because that's what I've seen her do, so common sense tells me to be prepared. I was deep seated before going over that friggen cross bar, then I went so far forward; it was a textbook example of jumping ahead of the horse. She trot over it perfectly, if not a bit lacklusterly. I showered her again with my attention, this time with less acting. We did it a second time, and she was too fast over the second one, so she didn't get a pat, but she completely understood what I wanted by the third time around, and trot over the cross bar beautifully.

And that's where I'm leaving you off because the canter was a shit storm. Syd and I did switch at the end though, so I had some time with my preferred pony. Yeah, she launched over the cross bar. Talk about engaging the hind end.