October 27, 2014
The universe was really working for me this weekend. Fifi took me to see her new barn for the first time. It was nice to see Miss El and Lee again. It’s been too long. On a super awesome note, Lee is going for her equine massage therapist certification (or something along those lines). I’d like to do something like that in the future, but architecture for now.

Fifi and Lee rode outside yesterday. It was a nice day, in the sixties, but the wind was up, and Miss El was not having it. She was all bundled up in her jacket, hands in the pockets and zipper to the chin. Sanibel also wasn’t having it. She decided that forward was not a necessary part of the training pyramid. She did (eventually) get moving but only after lots of begging and pleading and demanding from her mommy. They did some 2’9”-3’0” stuff, too.

When it looked like the day was about to end there, Miss El asked Fifi and me if we wanted to go ride some horses that she was training. We said sure. 30 mins or so later, we arrived at a quaint farm in essentially the middle of nowhere. A couple owns the place, and Miss El is training their two trail horses. I didn’t actually think I would be riding, but Miss El had me tack up and gave me her helmet, and I got on a horse whose name might have been Doxy. I suck at remembering horse names. Doxy was trained for ranch pleasure, but she hasn’t done it in quite some time. We just did the basic walk/jog, tried some turns on the haunches that were mainly shoddy, then we tried loping which was downright horrible. Miss El had to get on and actually get Doxy to do it before I could get a decent transition, and it still took five or so tries before I could get one right lead canter. We went on a trail ride after that, a nice, long relaxing one. It’s been too long. 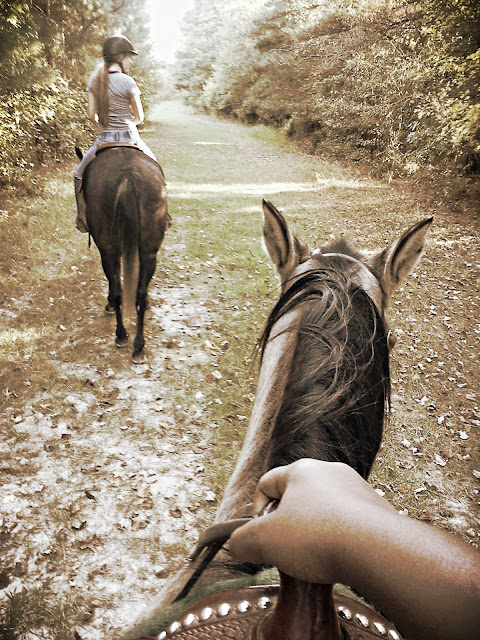 I’m a hunter by trade, so it was strange to actually work in a Western saddle. I’ve putzed around on Miss S’s Western horses, but never anything serious (I came close to falling off more than anything). Part of me genuinely wants to keep riding Doxy and possibly show her next year for fun. They have Western classes at the shows that I do, so it wouldn’t hurt my schedule too much, and Miss El said that she would give me lessons, but money is the issue. Maybe if I actually get some money from the show I’m having, then I could spend a little more on Western lessons., but English for now.

Miss El and Fifi had some fun time with Roman yesterday, too. He’s only been backed a couple of times; Miss El has mainly done groundwork and lungeline stuff with him. The only sound on the actual videos is us cracking up.