October 11, 2014
That moment when your trainer says that they don't like to torture you . . . yeah, I'm going to have to challenge that. Even the nicest trainers get a chuckle out of making their kids two-point eternally or ride with an arm behind the back. It's just one of those things that comes with teaching people how to ride.

I must say that Miss S has spoiled me though, both in the amount of work I do in the saddle and in the fact that we have an indoor. It rained yesterday, poured late last night, then drizzled the entire day over here. It's still going, too. Never again will I complain about the indoor, no matter how tight and dusty it is. It's shelter, and that's better than riding in the rain and avoiding puddles, plus it minimizes the chance of your horse's hind end slipping in the direction opposite of the one in which you're going.

Dusty (cause I finally remember his name!) was my mount today. He's the same horse from last week. I was happy to be on a simpler, kick-to-go type of horse today; I had the SAT this morning (uuuuuggggghhhhhh). The test actually ended up going an hour over the time it was supposed to end. I have no idea how that happened, but, I came prepared. I wore my riding clothes to the test since there wasn't going to be much time between the end of the test and when I had to leave. Of course, I received some strange looks, but Schmitty complimented my pants, so it's all good.

But, while my ROOTD was on point, the rain and cold meant that my lovely orange button down was mostly covered by my jacket. I'd had this outfit prepared for almost a week. The rain ruined everything. 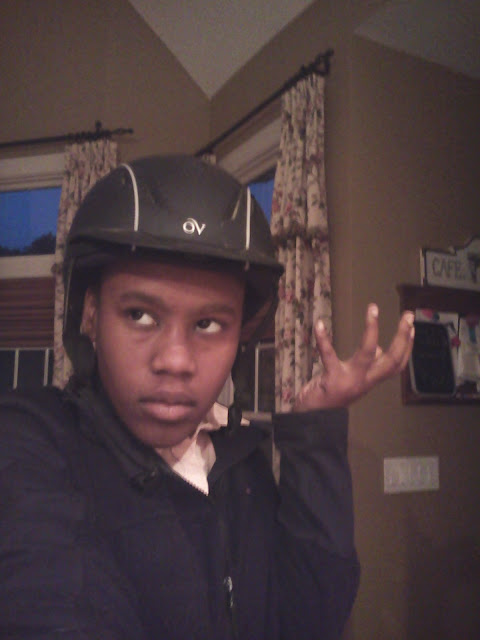 Never mind that, onto the riding thing. Dusty was feeling some type of way today and wouldn't stop being super mouthy. On the ground, he kept trying to sniff and nip at me, then, when I got his bridle on, he would not stop chomping on the bit. It didn't matter what we were doing, he was chomping. I rode in an Albion Legend saddle today, and, as a quickie review, it was amazing. I think if I end up buying a new saddle, I'm going to go for a slightly forward flap. I can still get those in a CC style, and they fit my shortish legs surprisingly well. This particular saddle also had on those flex stirrups, which I usually hate with a passion, but today they helped me so much with my two point. I actually felt like I was crouching, and the fact that they give to pressure meant that my ankles didn't feel as stiff as they usually do.

We did the same walk a couple laps in two point, then trot a couple laps in two point, then rising trot, all both ways. Then we dropped our stirrups, and this is where the torture introduction comes in. "We're just going to do a little bit of no stirrup work," says Miss J, "I don't like to torture my students." Yeah, course you don't. It started off easy with the sitting trot, then she had us do a rising trot, which I've struggled with recently, but God bless that saddle. It was sticking so much to my half chaps that I didn't have to hold on with my legs too much. All I had to do was move my hips. It was wonderful. We picked up our stirrups, cantered with them, then dropped our stirrups and cantered without.

After all the basic flatwork was said and done, Miss J had us do an equitation test where you have three changes of lead on a straight line, then you halt at the end of the line. That didn't go well. Dusty just did not want to pick up the right lead . . . actually, he didn't want to pick up either lead, but to counter canter became the eighth deadly sin. Two unsuccessful tries led to everyone having to practice leg yielding at the walk and trot. Of course there was resistance at first from Dusty, but he eventually complied when he realized that I wasn't asking him to do a perfect half pass across a tight rope. We finished everything with pizza and soda.

My biggest issue today was Dusty's head flinging, which means we're going to work with a much lighter contact next time I ride him. He was much more forward today, and not the bad kind of forward, the good kind where they actually put effort into what they're doing. It's nice not having to have nearly constant leg.